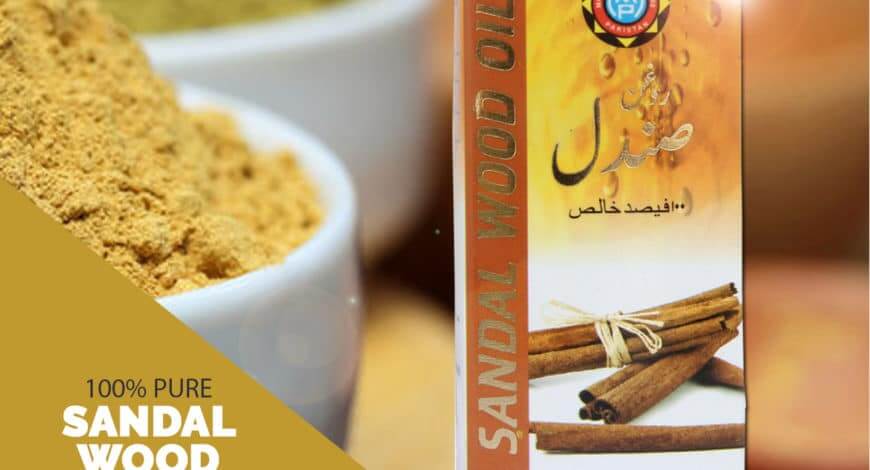 Of the plant genus Santalum, sandalwood is a slow-growing, semiparasitic tree native to South Asia, Oceania, and the islands of the South Pacific. With glossy green elliptical leaves and a root system that receives some of its nourishment from other living plants, sandalwood grows to a height of 33 feet and takes anywhere between 30 to 60 years to mature. It is highly prized for its long-lasting woody fragrance which is used in perfumes, soaps, flavorings, and incense.

The variety of sandalwood grown in India, Santalum album, is considered “true” sandalwood, imparting a rich, sweet, creamy aroma. Sadly, due to its high demand and the length of time it takes to grow, Indian sandalwood has suffered from over-harvesting and its status is listed as vulnerable (a rung above endangered) on the IUCN Red List of Threatened Species.

A suitable – and far more ecologically sustainable – alternative is Australian sandalwood, Santalum spicatum. Smooth, woody, earthy, and hinting of balsam, Australian sandalwood is drier and less sweet than the Indian variety but its scent is distinctive and exotic all the same.

Essential oil of sandalwood is steam-distilled from the roots and heartwood of the tree. As a rule, the older the tree is when it is harvested, the purer and stronger the essential oil will be when it is extracted.

Sandalwood’s most important organic compounds are the sesquiterpenes alpha-santalol and beta-santalol. While β-santalol gives sandalwood oil its powerful fragrance, α-santalol is primarily therapeutic with many healing, protective, and enigmatic properties.

Used for centuries in Hindu, Buddhist, and ancient Egyptian ceremonies, burning sandalwood was thought to relieve depression and restlessness, promoting spirituality and inner peace. The fragrance is still used today in funeral rites to instill comfort and acceptance among mourners.

A pilot study published in Complementary Therapies in Clinical Practice in 2006 noted that sandalwood oil was capable of reducing anxiety in a small sample of patients receiving palliative care. Both sandalwood oil aromatherapy massage and exposure to sandalwood oil via an aroma stone eased the symptoms of anxiety more effectively than a massage with sweet almond oil alone.

Read More: How To Use Essential Oils For Anxiety: 12 Experts Share Their Secrets

2. Sandalwood Oil as a Sleep Aid

Throughout the ages, sandalwood has been heralded as a potent sleep aid and remedy for insomnia. And how the compounds alpha-santalol and beta-santalol impact the central nervous system was revealed in a 2007 study performed on rats. Inhaling a concentration of santalols caused a sedative effect in the rodents and increased the duration of non-REM sleep, a finding that would be particularly beneficial for those who have trouble staying asleep. The researchers purposefully impaired the rats’ ability to smell and found that a lack of fragrance did not change the results – suggesting that the therapeutic action of santalols work by way of the circulatory system, being absorbed into the blood through respiration.

Read More: How To Use Essential Oils For Better Sleep

In order to better understand the mechanisms at work, the subjects of the study were fitted with breathing masks to prevent them from smelling the fragrance of sandalwood. When applying sandalwood oil to the skin, eye-blink rate and systolic blood pressure were significantly decreased, indicating an overall reduction in physical arousal.

Even though the study’s participants could not smell the oil, they still consistently reported higher levels of attentiveness after receiving a sandalwood oil massage. Furthermore, the blood pressure lowering effect induced by the oil directly corresponded to an increase in concentration and alertness in the subjects – i.e., the lower their blood pressure, the more alert they felt. This finding implies that sandalwood oil has a unique ability to separate a physically relaxed state from a mentally acute one.

How can sandalwood oil have the capacity to help us sleep, relax our bodies, and keep us mentally alert? While there is still much to learn about this mysterious oil, a study published in 2006 demonstrated that inhaling sandalwood oil at high concentrations has the uncanny ability to stimulate us physically and mentally.

Using a powerful concentration of sandalwood oil (at a much higher intensity that you would find in the average bottle), researchers measured an array of physiological responses such as respiration rate, skin temperature, blood pressure, and the like. They found that it excited the subjects’ autonomic nervous system by elevating pulse rates and skin conductance, a phenomenon where the skin becomes temporarily better at conducting electricity. Researchers also observed that it helped increase attentiveness and enhance mood.

Although this study supports the idea that sandalwood oil promotes mental vigor and acuity, the physically rousing effect of smelling sandalwood oil stands in stark contrast to the 2004 study. While this discrepancy could be partly explained by the route of administration (inhalation vs. massage), the intensity of the odor also may have impacted the results – the odor was so strong that it was described by the participants as pungent enough to make their noses itch.

Referencing a previous study, the authors noted that subjectivity plays a prominent role in how essential oils affect individuals: those who found the scent of sandalwood agreeable and pleasant experienced a physiologically calming effect; those who perceived it to be too pungent and unpleasant experienced an increase of activity in the autonomic nervous system.

5. Sandalwood Oil as a Treatment for Acne

The results from a clinical trial published in 2012 revealed that sandalwood oil is an effective treatment for facial acne. Using a mixture of sandalwood oil and salicylic acid on 47 adolescents and adults with mild to moderate acne over eight weeks, researchers found that 89% of subjects saw an reduction in lesions and inflammation, with 66% improved, 19% much improved, and 4% very much improved.

The active ingredients in sandalwood oil – α-santalol and β-santalol – were found to have impressive anti-inflammatory action that function similarly to ibuprofen and other non-steroidal anti-inflammatory drugs, but without the side effects. Shown to substantially suppress pro-inflammatory cytokines and chemokines, the researchers speculated that sandalwood oil could be an effective treatment for sunburns, psoriasis, skin warts, and other inflammations of the skin.

The chemopreventative effects of sandalwood oil have been examined in several studies and the results so far have been quite encouraging.

A study published in 1997 found that sandalwood oil was protective against chemically-induced skin cancer in mice. Use of the oil reduced the incidence of tumors by 67%, decreased the growth of the tumors by 96%, and inhibited the activity of enzymes that are associated with cancer by 70%. Similarly, research from 1999 replicated these findings, noting that the mice who received sandalwood oil topically before being treated with tumor-promoting chemicals had the greatest protection against skin cancer.

Identifying alpha-santalol as the key ingredient for preventing skin cancer, a 2003 studyisolated this organic compound and found it delayed the development of skin tumors by two weeks (as compared with the control group), while also reducing the incidence and multiplicity of tumor growth. Taking these results even further, research published in 2015 found that alpha-santalol incited cancer cells to die off in test tube experiments on melanoma, non-melanoma, breast, and prostate cancer.

Botanical oils have long been used as anti-bacterial and anti-viral agents in traditional medicine. While the unnecessary overuse of antibiotics has led to a rise in drug-resistant infections, essential oils are proving to be a potent cure for an array of difficult-to-treat bacteria, fungi, and viruses.

Methicillin-resistant Staphylococcus aureus (MRSA) is type of staph infection that presents itself as painful red bumps and swelling on the skin in most cases, but can be life-threatening when contracted in a hospital setting. Pitting several essential oils against MRSA reference strains, including tea tree, thyme, lavender, eucalyptus, lemon, cinnamon, lemongrass, grapefruit, clove, sage, peppermint, kunzea, and of course, sandalwood oil, researchers found that every single oil they tested was effective in inhibiting this infection. The same study also found these oils to be useful for treating antimycotic-resistant Candida strains.

Likewise, the herpes simplex virus (HSV) is another infection that has no cure and medical treatments are primarily focused on minimizing outbreaks. Spread through direct contact, HSV type 1 is known for oral infection, causing cold sores and blistering around the mouth and face, while HSV type 2 typically affects the genitals. HSV can infect the hands and eyes; it can also invade the central nervous system, which can damage the brain.

As a potential treatment for HSV, sandalwood oil has proved effective for both types of herpes simplex virus. In one study, sandalwood oil did not destroy the virus, but it was able to curb its spread. In another study, use of ginger, thyme, hyssop, or sandalwood oil prior to infection reduced the rate of HSV type 1 infection by an impressive 95.9% to 99.9%!

In research published in 2000, alpha-santalol was found to have an analgesic effect by reducing twisting, squirming, and bodily contortions in lab rats during acid-induced writhing tests. Binding to the delta opioid receptors – which are involved in pain modulation, but also have anti-depressant effects – α-santalol was observed to relieve pain while also regulating dopamine and serotonin levels in the brain.

Of the six sesquiterpenoids tested in the study, α-santalol was observed to have a similar effect as the drug chlorpromazine (Thorazine), which works by changing the activity of natural substances in the brain. Though chlorpromazine is typically used to treat psychosis, it is also prescribed for attention deficit hyperactivity disorder, to control nausea and vomiting, for short-term anxiety, and to remedy severe and prolonged hiccups. Another study, published in 1995, also recognized the similarities between alpha-santalol and chlorpromazine as a pharmacological agent, which shows some potential for its use to help treat these conditions naturally.

Welcome to Mahmood Herbals, pure and natural herbal products from raw to extraction and to your doorstep. Keep ordering.